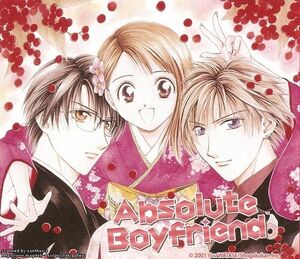 Absolute Boyfriend (絶対彼氏。, Zettai Kareshi.) is a six volume manga series by Yuu Watase, first serialized in Shōjo Comic. Chuang Yi licensed it for an English language release in Singapore, with the first volume released in March 2005. Viz Media licensed the series for an English release in North America, serializing the series in its Shojo Beat manga anthology as well as releasing the volumes.

The manga series was adapted into an eleven episode live-action drama series. It has been confirmed in October, 2010 that a Taiwanese version will be filmed.

To write a new article, just enter the title in the box below. <createbox> width=24 break=no buttonlabel=Create new article </createbox> Not sure where to start?